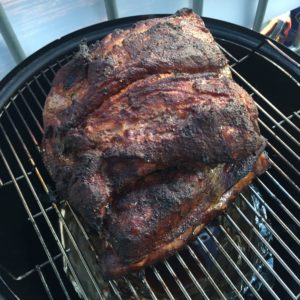 Pork, and particularly pork shoulder is one of my favourite cuts of meat. I mean, after all, without it we wouldn’t have pulled pork, bacon or crackling. Imagine that world!

This isn’t so much a recipe as much as it is guidance, because it’s pretty straight forward.

I usually run a knife underneath the skin to remove from the meat (make sure you get some of the fat layer) and put it back into the oven at a high heat for another 10-15 minutes for crackling.

Once it’s cooked, let it

Keep up to date

Keep up to date with the latest recipes, news and offers

You have Successfully Subscribed!

Any orders placed in the Moonshine BBQ store from 30th September will not be shipped until after 11th October. We apologise for the inconvenience. Dismiss